Play on the Plains 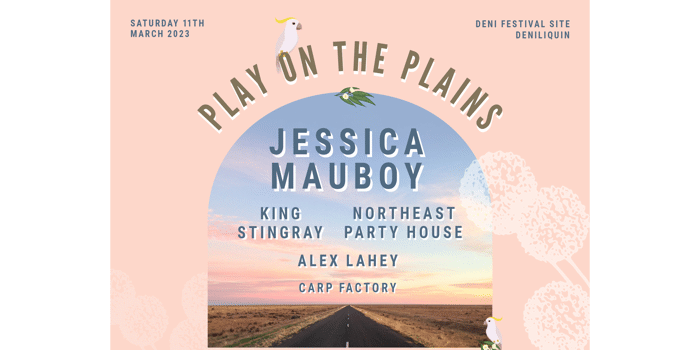 For the third time, the iconic Deni Ute Muster site will turn into a dancefloor / party house when Play on the Plains returns on Saturday, 11 March 2023 with Jessica Mauboy, King Stingray, Northeast Party House, Alex Lahey and The Carp Factory confirmed to set the stage alight.

Tickets to Play on the Plains 2023 are $120 (plus booking fee) and are on sale NOW through Oztix, with tickets for children under 13 only $20 (plus booking fee). With gates opening at 12 noon, licensed bars, food vans, beach volleyball, silent disco, camping and free on-site parking, grab your mates for a topflight weekend on the plains!

For our Victorian and ACT friends having a public holiday on the Monday, cross the border and see what you’ve been missing!

Check out all that Deniliquin has to offer, including dancing your butts off at Play on the Plains, then a leisurely trip home across our beautiful countryside for a perfect long weekend experience!

Local bus company, Dyson Group, will be operating charter buses to and from Echuca/Moama, Picnic Point, Mathoura, Hay, Booroorban, Wanganella, Pretty Pine, Strathmerton, Koondrook, Barham, Wakool, Yarrawonga, Mulwala, Cobram, Barooga, Tocumwal and Finley as well as a shuttle service to and from Deniliquin Town Centre. Bookings can be made through Oztix and timetables, including pick up locations, are here.

This year we’re also opening up on-site camping from 12 noon on Saturday, 11 March until 11.00am on Sunday, 12 March so bring your swags, tents, caravans, station wagons or campervans and make a full weekend of it! Site bookings can also be made through Oztix.

The event will be fully cashless with RFID wristbands and top-up stations on site and the opportunity for online top-ups prior to the event. Once the festival is over, attendees can retrieve their unused funds online.

Headlining the 2023 Play on the Plains is our Queen of stage and screen, Jessica Mauboy.

Multiple ARIA-Award winning, R&B-pop artist, songwriter and actress, Jessica Mauboy, is one of the country’s most celebrated and loved entertainers.

Jess has an impressive body of work including 6 x Top 10 Albums and 16 x Top 20 Singles, over 200 million+ streams globally, 2 x ARIA Awards, 21 Platinum and 9 Gold accreditations, is the first indigenous Australian artist to debut at No. 1 on the ARIA Album Chart, multi-award winner including AACTA Award, APRA Award, Australian of the Year Award, MTV Europe Music Award, MTV Australia Music Award, not to mention her many TV roles including starring in ‘The Sapphires’, ‘Bran Nue Dae’ and The Voice Australia Coach (2021-2023).

Jessica continues to inspire and is determined more than ever to extract the most positive and motivating elements of all that she has learned and infuse them into her new music and share it with the world.

Also on our stellar line up are King Stingray, the tight-knit crew of Yolŋu (Aboriginal people of northeast Arnhem Land) and balanda (non-Indigenous) musicians who’s recently released self-titled debut album was triple j’s Album of the Week and is a revelation – everything the world has come to love from this five-piece Yolŋu surf rock combo. Recorded and produced between the NT, Brisbane and the Byron Bay hinterland, King Stingray’s do-it-yourself ethos and connection to home and family resonates through every song.

Think Warumpi Band’s Big Name, No Blankets; Tame Impala’s Innerspeaker; The Chats’ High Risk Behaviour. Then add an ancient tradition of manikay (song/songlines) that dates back tens of thousands of years, and a profound love of country and Mother Earth, and there sits King Stingray. Raw, wild and free.

We’re chuffed to confirm that Northeast Party House will be returning to the Play on the Plains stage in 2023.

Northeast Party House are undoubtedly a party band, but don’t let that fool you. The Melbourne six-piece might be known for their unapologetically hedonistic lyrics and raucous live shows, but behind their songs of excess and frivolity is a band of surprising substance. Fun is still on the menu, of course – the title track is about a 17-hour bender in a Berlin club – but there’s plenty of space for reflection, too, about relationships, accountability and the inevitable lows that follow extreme highs.

The band recently released their third album, Shelf Life, featuring singles Dominos and Magnify. The album was co-produced between the band and Kim Moyes of The Presets, with the Melbourne six-piece breaking barriers to traverse new ground sonically.

A celebrated talent with a sardonic streak and a flair for crafting melodically charged and relatable pop-punk anti-anthems, Alex Lahey first broke through in 2016 with her hit song You Don’t Think You Like People Like Me.

Since then, she’s clocked up over 50 million streams on DSPs worldwide, dropped two Top 30 ARIA Albums, been nominated for ARIA and AIR Awards, placed four tracks in the Hottest 100, appeared on late night TV shows in the US, (including The Late Show with Stephen Colbert in June for her collaboration with Gordi on Dino’s) and even popped up on a billboard in Times Square. Her global appeal has seen her music covered by Pitchfork, The Guardian, Stereogum and The Line Of Best Fit, and appear on cult games including Tony Hawk’s Pro Skater and was recently long listed for an Oscar for On My Way which featured in the Oscar Nominated animated feature, The Mitchells vs The Machines.

Rounding out the main stage are local heroes, The Carp Factory.

The Carp Factory are a five-piece, garage-rock hive mind with members hailing from Deniliquin to Alice Springs. Taking notes from Australian rock legends such as King Gizzard and The Saints and blending them with the contemporary Melbourne punk movement, the band has been described as ‘really super cool and fun,’ ‘quite handsome,’ and ‘not to my taste’ by their parents.

Also on the menu this year, we’ll be giving local Primary and Secondary student musicians a chance to enter our Battle of the Bands competition.

Split into three categories – Senior Band (High School), Junior Band (Primary School) and Solo Artist (Primary or High School) – these young musicians will each get to play a set, including production and sound mixing, on our “B” stage between the Main Stage artists’ sets. Winners in each Band category will win cash prizes. The Solo Artist winner will receive a $750 musical equipment voucher courtesy of Deniliquin Nextra. The winner of the Senior Band competition will also get the chance to open the main stage at the 2024 Play on the Plains Festival! Go to www.playontheplains.com.au for entry and terms and conditions, or call (03) 5881 3388 for further information.

Play on the Plains’ General Manager, Vicky Lowry, said today: “We are thrilled to be back for our third year, adding to and growing the event with camping on site and a Battle of the Bands. Play on the Plains was created for a younger audience through to families, bringing them all together to experience the best of our young Australian talent. Come and Play and Stay On The Plains!”

Photos and bios can be downloaded here.

Tickets to Play on the Plains 2023 are on sale NOW from Oztix.